What I designed today is still in the works but here’s the first draft. I had a client make an unusual request: they wanted a mascot of sorts for their children’s publications. It’s not their logo, but it’s a friendly “wolfie” which was, apparently, Mozart’s nickname as a youth. He’s to be splashed all over their publications involving youth during the coming year. I’ve created two wolfies (each with slight variations): one for a younger audience, heavily based off this royalty-free art from comodo777 at BigStock and a second one entirely created by me for a slightly older audience. Which would you choose?  Let me just say, drawing that wig was so satisfying!  And, also, there is zero vector artwork readily available for Mozart wigs.  Just sayin’.  Well, now there’s one… 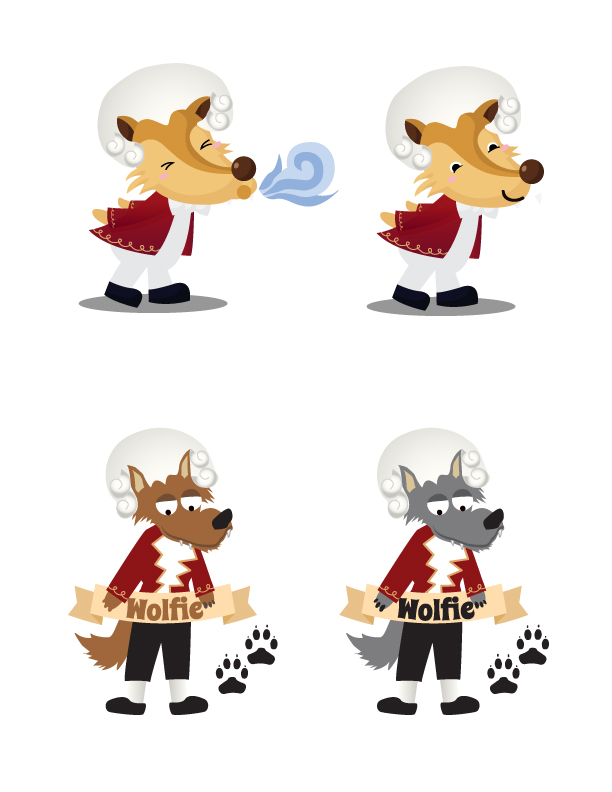 Sigh. He’s 15. We should be getting a learner’s permit, right? He’s got some catching up to do in scouts for that to happen. He’ll do it – he’s a self-motivated kid and we don’t push like some scout parents. I wish we could have given him a bigger celebration this year because he means the world to us but finances are tight and the poor kid didn’t get anything at all present-wise from us though his grandparents on both sides came through. He does know we love him and I offered to make him his favorite dinner but he couldn’t commit to one so we had Taco Bell. He did get the traditional family chocolate cake. He is the best kid we could have ever asked for! I wouldn’t even trade him for a girl. He’s always been a good kid and here’s to hoping it lasts at least through the rest of the teenage years (one can hope, right?). So anyway, here’s a very public birthday note for Cole: We love you, Cole! You make us proud in every single thing you do. You are a great big brother. You are a smart, capable, responsible young man and you surprise us almost every day with your intelligence and witty humor. We will forgive you the antics on early morning seminary drives (that would be your antics, not ours). Love, Mom & Dad So there were lots of people so my MIL reserved the church. It was nice to have everyone sit down to eat together but there was an awkwardness afterward with no football and no couches. Moral of the story: Thanksgiving was meant to be held at home! It WAS fun, however, to see all of the Roberts and meet Ali’s kids and Rebecca and Josh, Boyd’s new wife and baby. Gabe turned 9 today. I did not spend the day in tears like I did when Cole turned 10. Maybe next year. I am sad, however, that the time flies so very quickly. I remember the day he was born as if it were yesterday. He was such a chubby baby! 9 lb 1 oz. As they carried him across the surgery room, his chubby arm flopped over the towel and it looked like I had a toddler! I was nervous because he did not cry. Just opened his eyes and looked around. They laid him near my face so I could see him – even though my arms were strapped down so I could not hold him — and he just laid there and looked at me for the longest time. I think I got to hold him in the surgery room for more time than any of the other boys.

Today, he is still an observant yet quiet kid – until you push him too far. He’s the one who can ride in the car without too many arguments with his brothers (except he is our carsick-easy kid). I love this about him. He can be engrossed in just being outside, or a book, or a movie and is completely content.

Some of my favorite things about Gabe:
1: He lounges. The pic above was at Hermann Park. Everybody else was climbing, running, getting hurt and Gabe was lounging. The arms behind the head is a sure sign of Gabe’s favorite position. He is a laid-back kind of guy. I love this!

2: He loves cold things: ice cream, popsicles. This is my kind of kid. Ayurvedics call this vata, I think (or is it pitta?)…whatever. It’s his area of expertise. He can devour cold things like nobody’s business.

3: He is kind. When I offered to take him alone to see “How to Train Your Dragon” the first words out of his mouth were a soft but surprised, “But I don’t want to go without my brothers.”

4: Gabe is smart. He was his 2nd grade teacher’s favorite student. He continues to do very well in school. He is so imaginative that he has to work on concentrating but watch out when he applies himself, the sky is the limit.

5: He is funny. He has an amazing sense of humor – better than most adults that I know. Gabe has been making us laugh since before he was born. He tried to grab the amnioscentesis needle TWICE as the doctor reinserted it in different pockets of fluid. He could sense a disturbance in the force. It’s no wonder he’s a Star Wars fan. He’s a seriously funny kid – even at 2 weeks old. I was singing in the temple choir for Winter Quarters and had to buy a nice dress (2 weeks post baby!) for the dedication and we were in a nice department store and Don was holding Gabe outside the dressing rooms. He tooted so loud and so often that it sounded – no joke – like an adult. EVERY single woman there thought it was Don and he was trying to pass the blame to Gabe – a 2 week old baby (yeah, right!)…but it really was Gabe. We used to say “Gabriel won’t you blow your horn?” when he was so very tiny. Thankfully he grew out of this stage very quickly.

Gabe is many more things – I could never cover them all – but today, he’s 9. One more year we’ve been lucky to have him in our lives. We love you, kiddo. Love, Mom & Dad I am so, so, so very excited to get one of these printed up on a canvas for our new home. It will be a 24 x 36 inch size (2′ x 3′) hanging portrait/vertically. I need to fix some of the typography but I think it will be pretty. The realtor’s sign has never, ever looked as good as with it’s “SOLD” sleeve on it. Cole admitted he went out and hugged it after he watched the realtor put it on. HOORAY! Fingers still crossed for a smooth closing… This past Sunday was about as perfect as any day could get. Gabe was sweet and brave and got baptized on his 8th birthday. His teacher, Miss Gibb, came and many friends and family. We are so lucky to have him in our family! Gabe is funny, smart, generous and kind (not to mention cute). We had a lovely time at the church during the baptism and yummy treats and cream filled cake afterwards. Thanks to all who came for making it such a special day. It was good to see cousins that we don’t see enough as well as old friends from Papillion. We love you all.