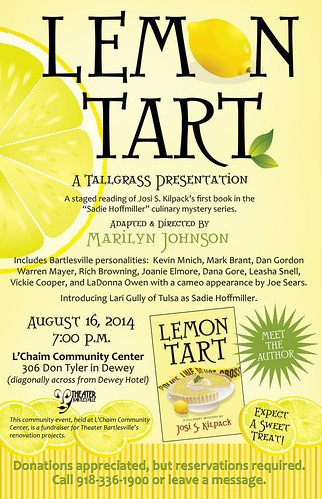 It’s been a long time since I blogged.  Almost a year, in fact.  I’ve missed it!  In my time away, I’ve done many things and learned quite a bit.  Let’s see how much of that I can get documented down the road but, for now, here’s some recent work I completed for Theater Bartlesville — even though I’m no longer serving on their board this year.  Last year was so much fun, not to mention meeting some pretty amazing people, but I simply don’t have time to do it again.  I won’t be doing most of their items but as a huge Josi Kilpack fan, this poster design I just couldn’t resist.  Can’t wait to meet her at the fundraiser. And, for all you font nerds out there like me, the font is My Aunt Celia and you can buy it at MyFonts. Theater Bartlesville’s next play is “The Real Inspector Hound”. These are my first drafts. Which would you choose? Left to right: Joe Sears, Charlie Taraboletti, Marilyn Johnson (along with Amity Hollenbaugh in the background, who really runs everything)

I arranged my first radio spot for Theater Bartlesville with Bartlesville Radio KWON — 1400 AM or 100.3 FM on the dial. I wasn’t nervous until it was OVER. I chose to sit in the back and not say anything but when the interviewer, Charlie Taraboletti, asked for dates, nobody else had them so I had to step up to the microphone. I had a frog in my throat (of course!) but I think it went well and, more importantly, I hope Bartlesville peeps will turn out for the show and buy some tickets! Many are thinking the theater will be sold out this year, so be sure to get your tickets while you can at 918-336-1900. Online ticketing at www.theaterbartlesville.com is not available but will be coming soon.

UPDATE 9/6/13: I’ve been told the radio interview is recorded and available online at Bartlesville Radio! Hallelujah! We can all bask in my frog-in-the-throat moment. Oh, well, at least Marilyn and Joe sound great! I thought you might like to see the progression of this particular billboard. The artistic director, Joe Sears, of Greater Tuna fame (Aunt Pearl? Tony nominee? Ring any bells?), created the yellow background and silhouette with watercolors on vellum and I scanned the artwork in and adjusted everything for print. It’s been 20 years since I designed a billboard. That makes me sound really, really old but the first time I did one, I was only 22. You do the math. I’m not a dinosaur…yet. Billboard design can be tricky but it’s nice to know the technology has improved enough to where an accurate color proof is available on the same vinyl they use to put up on the actual billboard. It was only $35 extra for the proof, and yellow can also be tricky, so I figured it was worth it. If all went well, we’d have an extra 2.5 x 4′ banner for the front window of the theater. The yellow turned out fine so it was a win, win!

In other news, I’ve been elected Marketing Director for the local community theater: Theater Bartlesville. It’s going to be a fun way for me to make more local connections in the printing and publishing industry, as well as the arts. It’s a great board this year so I’ve already met some fantastic, intelligent, kind people. This won’t kill me for a year term, right?!